Jefferson Street BBQ Puts Converse, IN on the Map 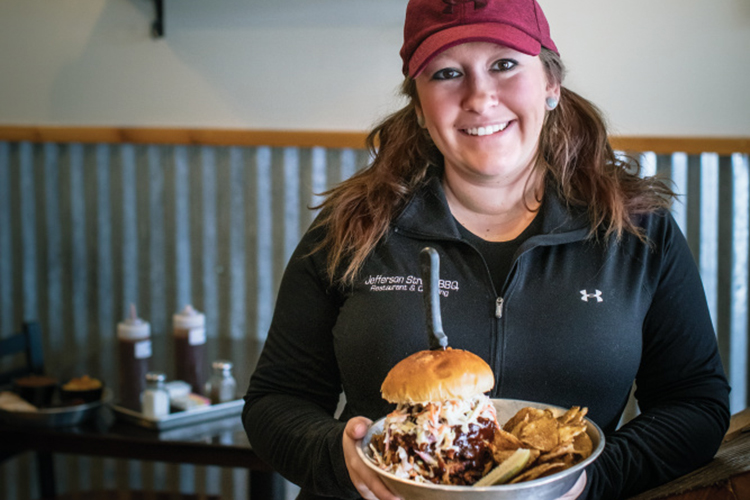 Lindsay Dingman Sheffield remembers telling her mother during her early 20s how much she longed for a personal chef because she loathed cooking. Back then, Sheffield never could have imagined she would one day be owner and chef at Jefferson Street BBQ, a popular farm-to-fork eatery in Converse.

“I always loved barbecue. I was always a foodie ­– I just hated to cook,” she says. “But there was a major turn of events in my life, because I opened Jefferson Street BBQ in 2012, and now I love cooking. I’m pretty much a self-taught cook, with lots of trial and error.”

From Farm to Fork 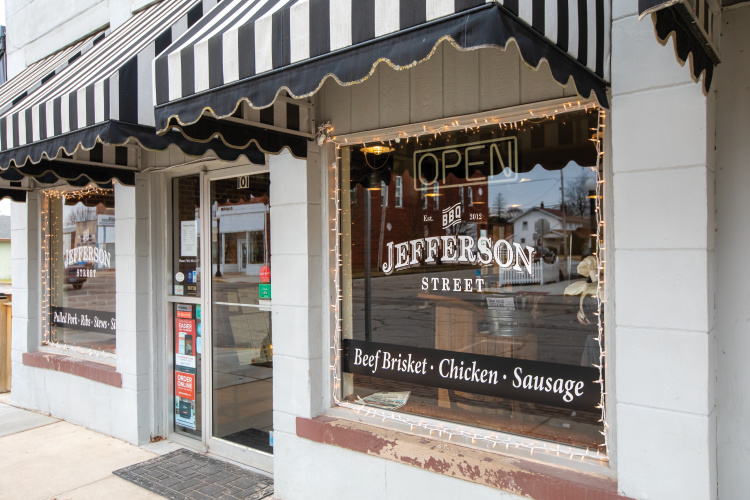 So why on earth would a person who dislikes cooking open a restaurant? It all started with Sheffield’s love for agriculture. She and her husband, Clint, raise broiler chickens and egg-laying hens on their farm, Double Deuce Produce, in Swayzee. Clint is the third generation to work on the farm, and besides raising chickens, they grow tomatoes, peppers, squash, zucchini, butternut squash, and pick-your-own strawberries and pumpkins.

Thanks to their farming background, the Sheffields already had relationships with multiple farmers in the region who could help with sourcing produce for a farm-to-fork restaurant. The result was a match made in culinary heaven.

“We started small with a counter-service restaurant and we’ve grown over the years into a restaurant with in-house dining, a full bar and full-service catering for events up to 50 miles away,” Sheffield says. “The neat thing is, our dishes are seasonal because we serve what we grow on our own farm, including our pasture-raised chickens.”

The Sheffields’ chickens are butchered at This Old Farm in Colfax and left whole so they can be smoked using hickory wood from the Double Deuce Produce family farm.

“We house between 100 and 120 grazing chickens as well, and we use their eggs in our restaurant on top of salads and in our desserts,” Sheffield says. “Our popular Farmer’s Salad has our eggs on it and they are also used in our bread pudding and crème brûlée.”

It’s All About the Food 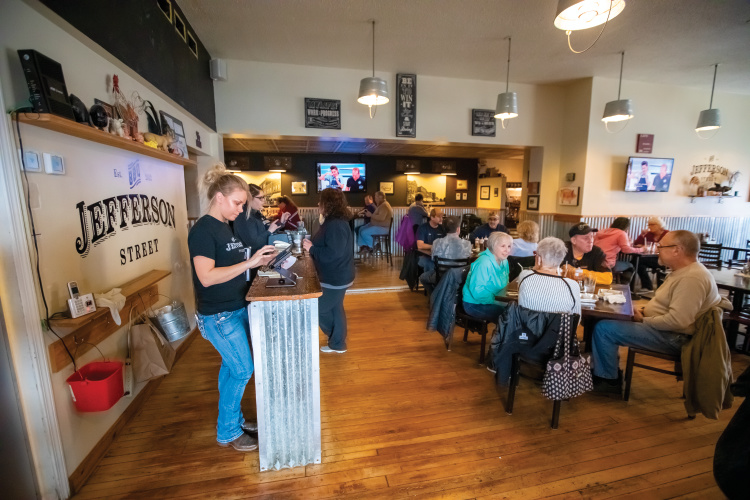 The star menu item at Jefferson Street BBQ is, of course, the pork, and it comes from Hunt Family Farms, located just 7 miles from the restaurant in Amboy.

“Hunt Family Farms pasture raises all the hogs. We also work closely with a sunflower and canola farmer who owns Healthy Hoosier Oil, and he has a facility close to the hog farm,” Sheffield says. “When they press the sunflower and canola for oil, they end up with pulp from the plant, which they mill and grind and put into the hog feed. That imparts an interesting flavor into our pork. It’s a neat cycle that we’ve been doing for five years.”

The most requested sandwich at Jefferson Street BBQ is called The Mechanic, which can be customized to anyone’s preference.

“It’s huge. Typically, people’s eyes get really big when you drop it off at their table,” Sheffield says. “It has three-quarters of a pound of meat – you choose pulled pork, chicken or beef brisket – and it’s topped with house-made mac and cheese, drizzled with our sweet or spicy barbecue sauce, and then topped with pickled jalapeño peppers.”

Pulled pork is served up in a variety of dishes, whether in a sandwich, on top of a salad or loaded onto a baked potato. The beef brisket is cut to order, too, and can be interchanged with the pork. Many dishes at Jefferson Street BBQ are accompanied by lightly seasoned, hand-cut Russet potato chips from Broad Ripple Chip Co. in Indianapolis.

A Destination for Foodies

“We’re happy to have our new dining area to accommodate more people,” Sheffield says. “It was actually our fourth expansion. We previously added an outdoor patio to our building, which is over 100 years old and listed on the National Historic Register.”

Jefferson Street BBQ has become a destination restaurant on weekends, drawing customers who live an hour away. Sheffield finds it incredibly rewarding to offer customers high-quality local foods from a variety of Indiana farms.

“My family and my husband’s family have deep roots in agriculture. I’m the fourth generation on my mom’s family farm, and Clint has been farming since he was very young,” she says. “Now we have a new generation with our daughter, Tilly, who is 18 months old.”

Jefferson Street BBQ continues to keep its menu fresh and exciting by incorporating new dishes that change with the seasons.

“We’re always evolving because I love trying new things,” Sheffield says. “Barbecue is definitely an art, not a science.”

TagsbarbecueIndianajefferson bbqrestaurant
← Previous Story
GIVEAWAY: LM Sugarbush
Next Story →
Albanese Candy is All About the Gummies