John Deere Book Recognized as INFB 2018 Book of the Year 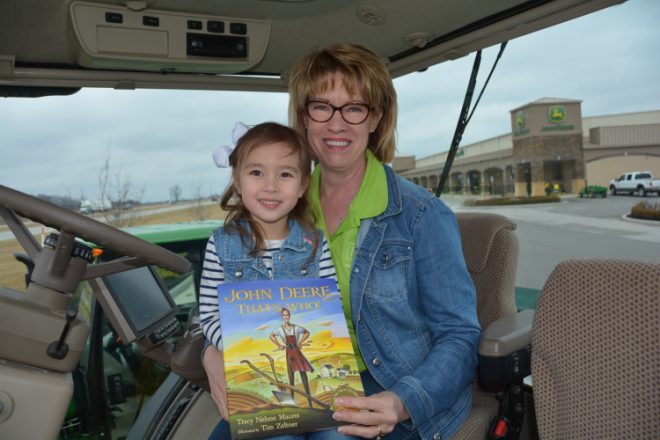 What can the story of John Deere, a young blacksmith who revolutionized farming with the invention of the steel plow, teach kids?

Quite a bit, according to the panel of Farm Bureau staff and professional educators who selected John Deere, That’s Who!, written by Tracy Nelson Maurer and illustrated by Tim Zeltner, as Indiana Farm Bureau’s 2018 Book of the Year.

The annual Book of the Year selection is a part of INFB’s Agriculture in the Classroom program. The purpose of the program is to increase understanding and awareness of Indiana agriculture in kids in grades pre-kindergarten through 12th.

Endorsed by the INFB Women’s Leadership Committee, a statewide campaign to promote the book in every county in 2018 began this spring. INFB has also prepared an educator guide, which is available for download on the organization’s website.

Isabella Chism, INFB 2nd vice president and chair of the Women’s Leadership Committee, says the promotion campaign will push into high gear during Agricultural Literacy Week, which is observed the second full week of September.

“Our goal is to extend our reach into more classrooms, schools, libraries and homes with a book that celebrates agriculture and the important role farmers play in feeding people in Indiana and around the world,” Chism says.

INFB launched its Book of the Year program in 2017 with The Kid Who Changed the World by Andy Andrews, which features four of agriculture’s important figures: Norman Borlaug, Henry Wallace, and George Washington Carver and his adoptive mother, Susan Carver.

John Deere, That’s Who! focuses on the life of John Deere, who started as a blacksmith in Vermont but who changed farming forever, becoming a household name in the process. Maurer explains Deere’s journey to Illinois where he learned of the farmers’ struggle to plow through thick soil, ultimately leading to his invention of the first commercially successful, self-scouring steel plow in 1837.

The book has won numerous honors such as inclusion on the National Science Teachers Association’s list of best STEM (science, technology, engineering and mathematics) books for 2018 and the Best of 2017 American History Book List.

“We get enough for all our county’s elementary school libraries and public library branches,” she says, as well some day cares and programs that provide books to kids in the hospital.

She adds that she thinks the book is valuable for all kids, especially those who have no knowledge of agriculture.

“It’s not just kids who need to be informed,” she says. “That’s why we need to put these books out – to inform the kids, to inform the public.”