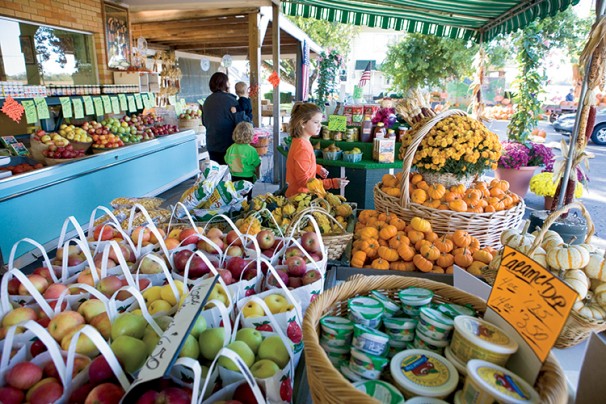 Visitors to Bush’s Market on 25th Street in Columbus discover a cornucopia of fall fare, ranging from pumpkins and pears to apples and gourds.

It’s come a long way from its humble beginnings as a small cucumber stand in 1929.

“My grandfather, Henry Bush, and his brother, Clarence, began selling cucumbers under a tree in the front yard,” says Rick Bush, who runs the farm and market with several family members. “They built the first market. We still have the original building, which is used for storage and office space.”

Eighty-five years later, the family-owned operation grows 120 acres of fruit and vegetables and 1,000 acres of grains. From mid-July through October, they sell seasonal produce at the market in Columbus, bulk produce to other growers and directly to consumers at the Columbus Farmer’s Market. From December to mid-March, the Bushes offer a range of pork products, processing about 350 to 400 hogs per season.

The farm family also includes Rick’s wife, Jane; his brother and sister-in-law, Gary and Tina Bush, along with cousins Joe and John Bush and their wives, Kathy and Shirley. Employee Ronald Plumm has also helped out for more than 20 years.

“Our grandmother died quite young in 1926, leaving Grandfather with five children to raise. Three of the four boys stayed on the farm: Bill, Henry Jr. and Marion (‘Horsefly’),” Rick says. “Horsefly was my dad, and Henry Jr. was [my cousins’] Joe and John’s dad,” he says, noting Marion got his nickname because, when seated on a horse, “he looked like a big fly out there.” 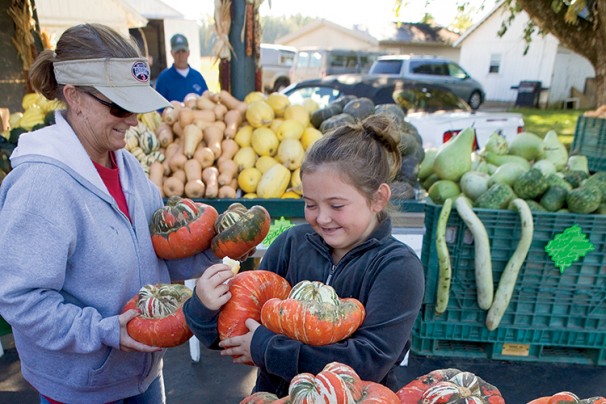 Henry Bush, who never remarried, raised cattle and grew wheat, corn and soybeans. Pork production began about the same time, Rick says. “Grandfather had to be ingenious and keep the kids busy during winter, so they were delivering pork door-to-door back during the 1930s and ’40s.”

Many of today’s young people choose not to enter the profession that has sustained their families for generations, opting for greener pastures. However, the rural lifestyle has kept the Bush family down on the farm, according to Joe Bush.

“I used to go out with my father when I was 5, 6 years old and always thought I’d be involved in farming,” Joe says.

Rick set out on his own for a while, only to return a few years later. “In the early ’70s, I left for more than eight years but came back,” he says. “It’s been very rewarding.”

“Rewarding” is a word Rick uses often as he discusses the family farm, and it is the reason why many fourth-generation members still help out, despite having full-time jobs elsewhere. That includes his daughters, Sadie and Mollie, John’s son, Steven, and Gary’s son, Brandon. 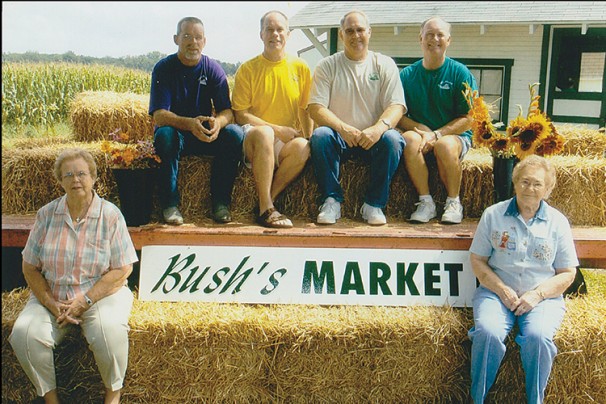 The Bushes have kept their farm all in the family through several generations. Pictured, from left to right, are Betty Bush, her sons Gary and Rick, her nephews John and Joe, and their mother, Bernadine.

“It’s a different lifestyle growing up on the farm than in the city,” Rick says. “And today’s young people can earn much more going elsewhere than they can by staying here. But in the long run, they find it’s very rewarding work.

“My wife and oldest daughter, Sadie, are at the Columbus Farmer’s Market on Saturday mornings. Last year was our first year. It’s something we dragged our feet about, but my wife said, as the oldest market in Columbus, we needed to be there.”

In fact, he says, since the beginning, the women have played an integral role in the operation.

“We really have to give our mothers and aunts a lot of credit. We wouldn’t have this without them. Aunt Shirley, Uncle Bill’s wife, worked at the market and fixed lunch for everyone. My mother, Betty, and Aunt Bernadine, Joe, and John’s mom, went to Indy every day to sell produce at the farmers market. Mother is still involved.

“Those women worked hard. If they weren’t on the road taking produce to market, they were selling it here alongside their husbands.” 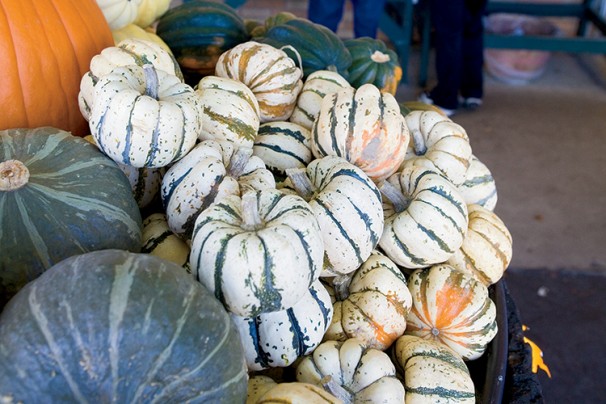 Fresh From the Farm

Joe attributes the family farm’s success to several things. “Each of us, when we come in, knows what has to be done that day, and we try to accomplish what we can,” he says. “So it’s basically hard work and the dedication we put into it. Plus, we’ve always taken the stand that we don’t want to put out a product we wouldn’t feel safe in consuming.”

Products continue to change with the times and trends, another factor in the market’s longevity. In recent years, a more diverse local population has dictated more diverse produce. For example, Joe says, they now carry a wider variety of peppers that are unavailable at local stores.

“We try to offer the community the cleanest and freshest fruits and vegetables available and, hopefully, the freshest state-inspected pork in the surrounding area,” Rick adds. “What we butchered at 4 a.m. this morning you can buy at 8 a.m.”

In the fall, Bush’s Market showcases pears and a wide variety of apples from Michigan and Indiana growers. The market also offers Indian corn, gourds, pumpkins, winter squash, bittersweet and mums. They carry three varieties of the increasingly popular white pumpkins, as well as Jarrahdale, a sage-green variety favored in home décor. 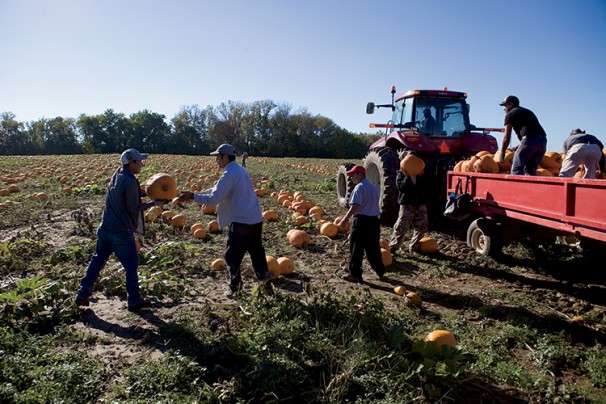 Employees of Bush’s Market pick pumpkins by hand and load them onto a trailer at the family’s farm in Columbus.

One fall weekend features the pumpkin cannon, which is strictly for demonstration purposes, Rick says. “We set an old car out in the field and demolish it with pumpkins shot out of the cannon. You can’t believe what the force of a pumpkin will do to a car!”

In the end, Joe says, Bush’s Market wouldn’t be anywhere without its customers.

“We’ve been very blessed by the patronage of the local community and surrounding communities,” he says, “and we’re very thankful for the people who come and support us.”