Why You Need to Visit Indianapolis This Winter 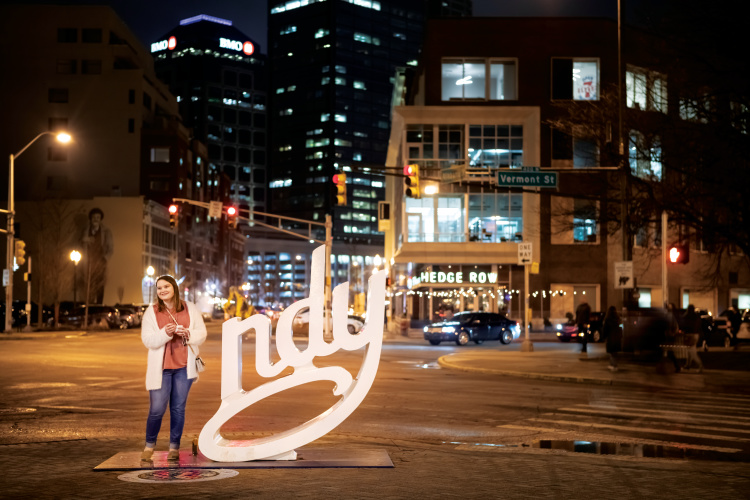 As the capital of Indiana, the bustling city of Indianapolis already has a reputation for its impressive racecar history and hosting the Indy 500, one of the largest sporting events in the world.

But even when the weather turns colder, when outdoor activities are less enticing for most, Indianapolis offers tons of fun for everyone from history buffs to foodies to kids fighting off cabin fever. Here are 10 reasons to make Indianapolis a wintertime destination.

Indy’s notable holiday lineup starts with the Circle of Lights on Monument Circle. “Nearly 100,000 people gather on the Friday after Thanksgiving to see the ‘largest Christmas tree in the world,’” says Nate Swick of Visit Indy. “Monument Circle is the spiritual and physical heart of the city, and more than 5,000 lights transform it into one big Christmas tree that stays up through the New Year.” 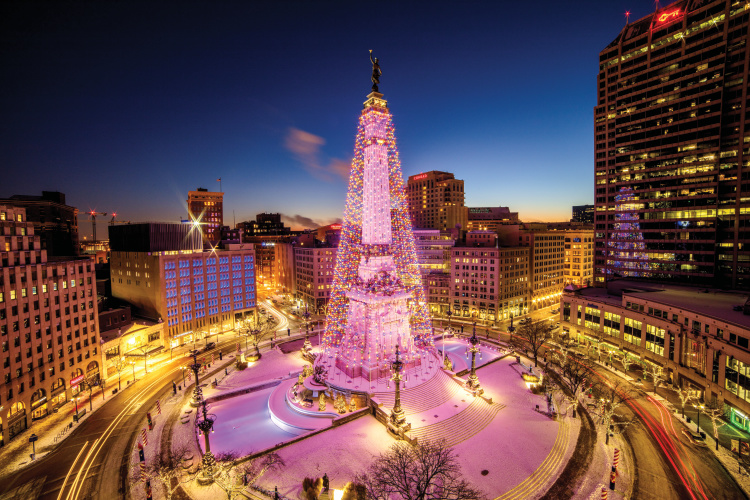 He adds that Indy is just behind Washington, D.C., as far as the number of monuments in the city, noting that showing off its patriotism is important.

Along with the Circle of Lights, visitors can head to the Indy Motor Speedway for Lights at the Brickyard, which features two and a half million lights along a two-mile portion of the iconic racetrack.

“It’s one of the only few times throughout the year that the public can drive on the track,” Swick says.

For a bit of a wilder winter, head to the Indianapolis Zoo for Christmas at the Zoo. This event started way back in 1967 and was the first zoo in the country to hold a Christmas light show. Guests can view the twinkling lights while sipping on a warm beverage and enjoy the sounds of a local choir. They can even hop on the White River Junction Train for a wintertime journey around the grounds. 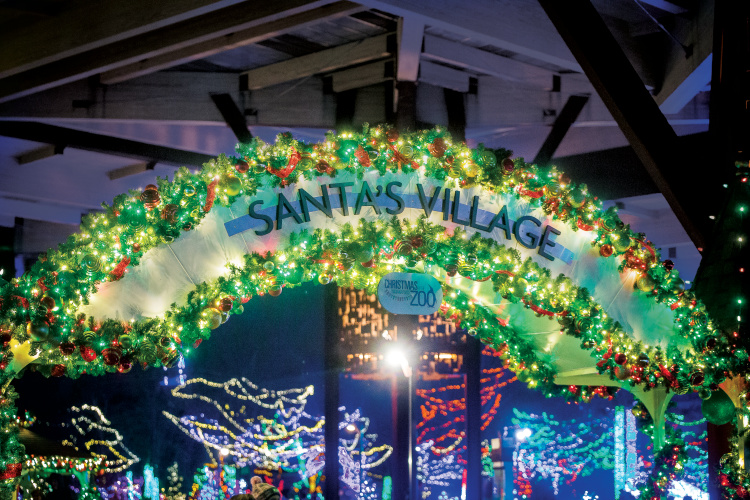 Speaking of trains, Jingle Rails at the Eiteljorg Museum of American Indians and Western Art is a can’t-miss event for the whole family.

“They have nine working model trains that take over the first floor of the museum,” Swick says. “The trains show downtown Indianapolis but also a journey through the American West. There’s the Grand Canyon, Mount Rushmore and more.”

A trip to Indianapolis would be incomplete without a stop at The Children’s Museum of Indianapolis. Don’t be fooled by the name – this interactive destination is fun for all ages.

“Some people think it’s a kiddie playground, and they quickly realize it’s much more than that,” says Kimberly Harms, director of media public relations at the museum. “I truly learn something new every day.” 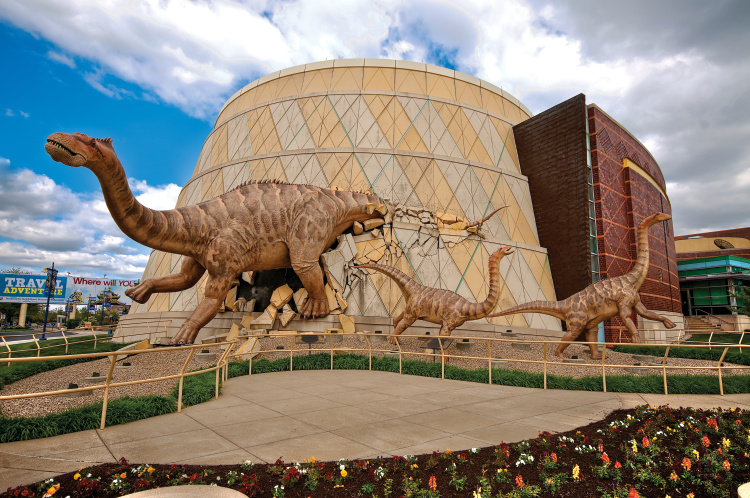 The museum’s key event in December is Jolly Days, which features a 46-foot-long “yule slide,” Santa arriving in an IndyCar racecar, a sock skating rink, faux fishing for the kids and more. After Christmas, the museum hosts Countdown to Noon for New Year’s Eve, where the country’s largest water clock splashes down each hour to the new year.

“We do it at noon and 1 o’clock so everyone can come before that night,” Harms says.

Kids will also be fascinated by two exhibits that explore modern-day Greece and how the widespread influence of ancient Greece continues today.

“Anyone who has children will tell you that kids get very antsy during the wintertime, so a visit to the museum helps them get out of the house while keeping them safe from the elements,” Harms says. “It becomes a place of discovery for kids of all ages.”

Other fun museums in Indy include the Indiana State Museum and the Rhythm! Discovery Center. 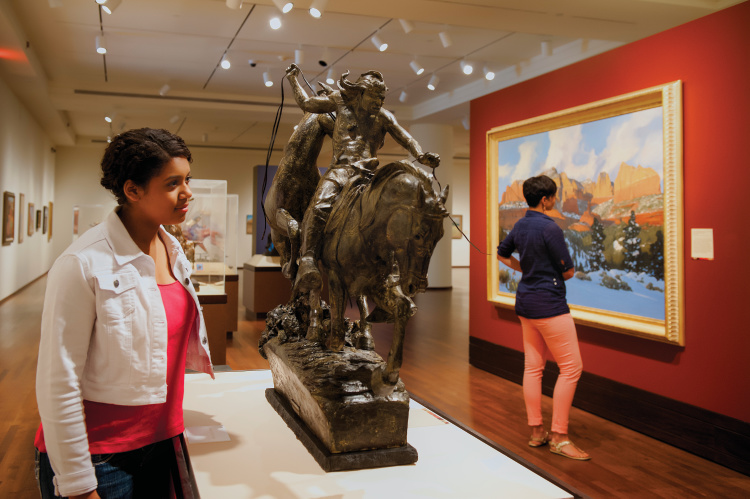 After museum-hopping, the Indianapolis City Market is a great place to curb your hunger. The food hall-style destination features lots of different restaurants and cuisine from all over the world. “Tomlinson Tap Room on the second floor includes all local Indiana beers,” Swick says.

Mass Ave. offers a plethora of restaurants, as well as shops, art galleries and theaters. 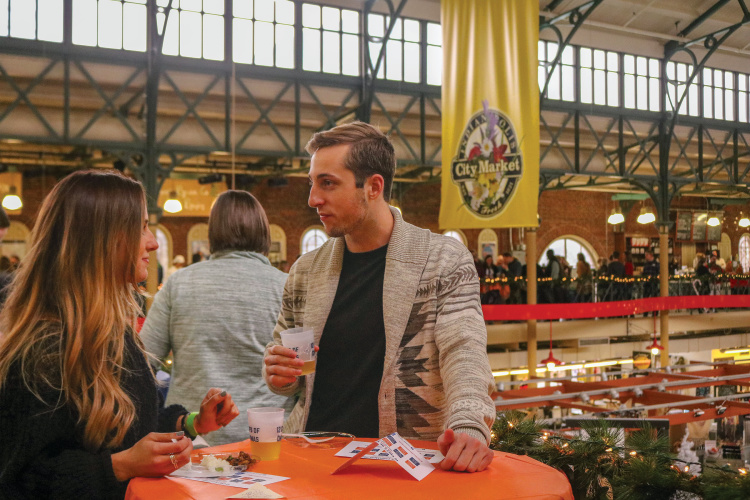 If you’re looking for something fresh in the dull days, visit one of the winter farmers markets or restaurants that use local produce, such as Public Greens or Hotel Tango. Make a day out of it by visiting Traders Point Creamery, located just outside of Indy, which offers farm tours, a delicious restaurant and fresh yogurt and milk products.

Christmas at the Zoo

The Children’s Museum of Indianapolis