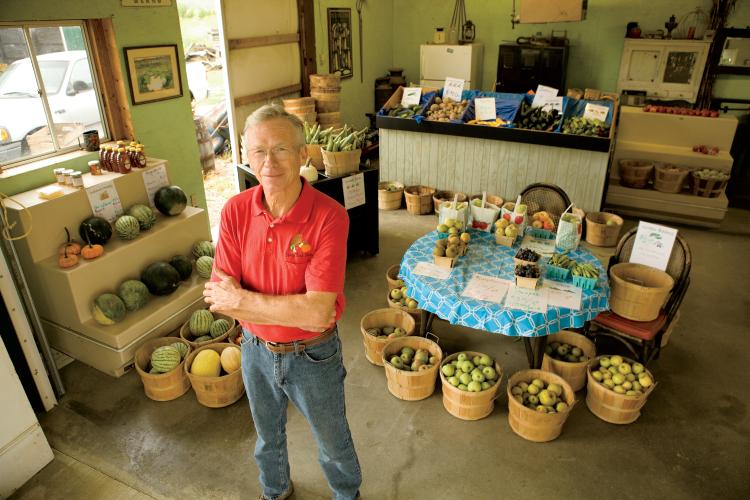 It’s a labor of love, growing cantaloupe and all the other fruits and vegetables Fouts grows on his 30-acre farm. Planting is only the first step in a cantaloupe’s long journey from seed to market.

As the weather warms, the 1.5-acre plot Fouts designates for melons gets fertilized, the irrigation system is checked and fine-tuned, and black plastic is laid down in long, neat rows set on 6-foot centers. Then, sometime in early May, depending on the weather, Fouts sets out the first planting of cantaloupe shoots – hundreds of them – with his own two hands.

“It’s a lot of hand work,” says Fouts, a Clark County Farm Bureau member. “We don’t have any machines to do that, so we do it all by hand. And I don’t know that they don’t do that on the larger operations, too; they’ve probably just got a bunch more people setting them.”

He’s right. A major Midwest producer with offices in Poseyville, Frey Farms Produce ships tons of cantaloupes (along with watermelons and pumpkins) to retailers large and small, far and near. But the melons start out the same way, sprouted in the company’s on-site greenhouses and transplanted by hand into carefully prepared soil.

In fact, soil composition and a temperate climate make the region ideal for melon production. “There are a few different areas in Indiana where that type of produce is grown,” says Dan Egel, extension plant pathologist at Southwest Purdue Agricultural Center.

At Berry Best Farm in Nabb, which straddles Clark and Scott counties, Fouts grows a number of cantaloupe varieties, in addition to watermelons and specialty melons. Frey Produce’s fragrant and flavorful Homegrown Midwestern Cantaloupes grow up to 40 percent larger than western varieties in the southern Indiana soil, and southern Knox County is home to the famous Decker melons, although Egel is quick to point out that “there is plenty of cantaloupe grown in the northern part of Knox County as well. The soils are a little different up there, but everybody has their preferences.” Other melon-producing counties include Sullivan, Daviess, Gibson, Posey and Jackson.

A second planting follows about three weeks after the first. “We spread out our cantaloupe a bit so we don’t have them ripen all at one time,” Fouts notes. A good thing, since he’ll harvest some 4,800 cantaloupes.

Once seedlings are in the ground, things can get dicey. Diseases, insects, weeds and weather can turn a farm into a battlefield.

Yes, cantaloupe has enemies, but it also has allies: bees. Berry Best and Frey Farms both depend on bees from local keepers and wild honeybees to pollinate their crops.

By mid-summer, the cantaloupes are coming in, and having a smaller operation with a market on the premises means Fouts’ customers get ripe-and-ready produce picked fresh that day. 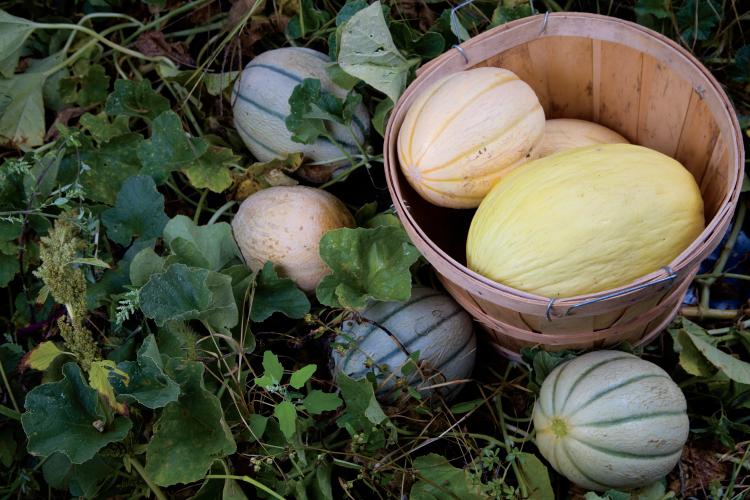 “Cantaloupe will pull off the vine easily right where they’re hooked on – that’s called ‘slipping’ – and if they slip, they’re ready,” he says. “I won’t pick it if it’s not ready.”

Sweet corn and tomatoes ripen at the same time, so it’s a perfect opportunity to visit Berry Best Farm and stock up on summer’s bounty. Berry Best also produces cucumbers, potatoes, green beans, squash, pumpkins, flowers and all kinds of berries, as its name implies.

If you can’t make it to a farm or a farmers market, don’t despair. Frey Produce growers also harvest melons at the peak of perfection. At the company’s packing facility, melons are washed and cooled, which extends shelf life, before being tagged with the Frey Farms label (look for it!) and shipped out to major grocery stores.

Markets have changed over the years, as have melon varieties, Egel says. “Now, a lot of markets are 600 or 1,000 miles away, and fruits have to be shipped. There are varieties now that are built to last the distance.”