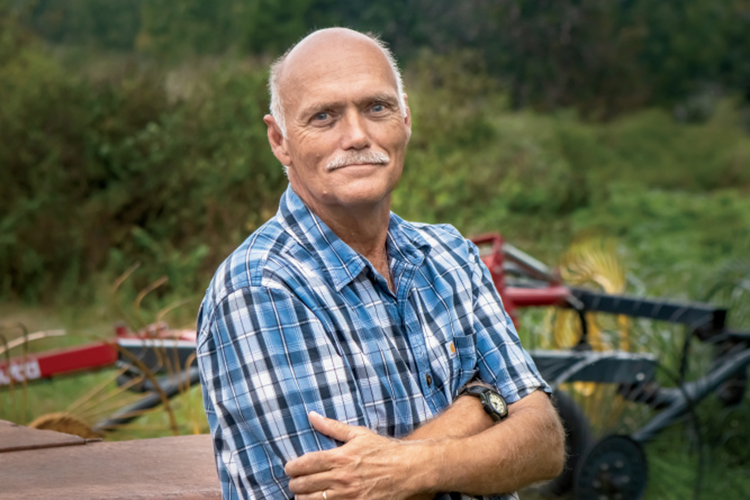 At the age of 57, Owen County resident Bill Whitman decided to pursue a Bachelor of Science in business administration – an uncommon choice for most folks his age, he says. The reason he made this choice is because he realized his lack of financial know-how was holding back him and his wife, Sue Whitman, who has her doctorate in veterinary medicine, in growing their horse rescue business.

According to the couple, their business is stronger than it’s been in recent years and is now poised for continued expansion and success. It’s safe to say that Bill’s coursework is helping their business graduate to the next level as well.

“At Horse-Angels Equine Rescue and Rehabilitation Center, a nonprofit organization focused on the mental and physical healing of horses in need, we take in starved, abused, handicapped and poorly behaved horses and work to find each of them a safe home,” Bill says. “It became evident in the past few years that we needed to better organize our finances and learn more about how we could support the business in a long-term way, and it seemed to me that education is where I needed to look to make these things happen.” Never Too Late to Learn

In 2016, Bill enrolled in the Indiana Wesleyan University-National and Global (IWU) online program, which appealed to him because he could complete his coursework at home and on his own schedule – a requirement for Bill because he’s still assisting Sue with Horse-Angels as well as growing approximately 185 acres of forage
on their farm in Spencer.

“Taking online classes with IWU has worked out exceptionally well so far,” says Bill, who is now 60 years old. “I’ve found that the instructors have been very willing to work with me, an older student who’s back in school for the first time
in several years, and they’ve even expressed interest in developing a new agriculture education program designed for nontraditional students like me.

“Plus, I’m able to go at my own pace and can take one class at time,” he adds. “IWU has provided a perfect solution for someone like me.”

To date, Bill has completed courses in subjects such as accounting and economics, and both he and Sue agree that his expanded knowledge base is serving Horse-Angels well.

“At first, I wasn’t sure that Bill should return to school – after all, it’s not like he has a lot of extra time, and I didn’t know exactly how helpful the classes would be – but I almost immediately saw the benefits of his education,” Sue says. “For example, he’s able to produce more hay more efficiently and has already helped our operation become more productive and financially stable. It’s a big relief to know that Bill has this aspect of the business covered. I can focus on caring for the horses and rest assured that he is going to keep us on track financially.”

A Firm Foundation for Farm Success

Bill encourages other “older” folks working in agriculture to consider returning to school to become more business-minded, too, calling it a “worthwhile investment” that today’s farmers and ranchers can’t afford to pass up if they want to succeed in the future. “Technology has changed agriculture in a major way, and there are many more changes coming that older adults in our industry need to be aware of,” Bill says. “The world is not the same as it was when my generation was growing up, so it’s critical that we keep up with the new developments if we want to stay in business and remain financially solvent – and it’s never too late for us to learn.”

In addition, Bill says he’s been able to immediately apply the information he’s learning, which makes his pursuit of education even more valuable.

“I am truly putting the things I’m learning into practice with Horse-Angels right away,” Bill says. “The knowledge I gain today from my assignments will be applied on the farm or in our business tomorrow, and that’s how I know going back
to school at IWU is already paying off. I’m not preparing for a future; I’m living it.”