Salomon Farm Park is a Farm for the Future 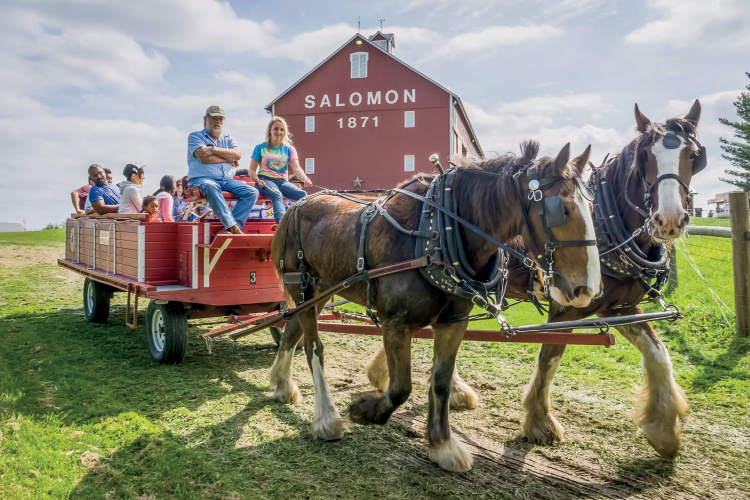 In 1871, when the Salomon family settled in northern Allen County, they selected farmland far from Fort Wayne’s downtown. Over the years, however, urban sprawl caused the isolated locale to be surrounded by thousands of homes and businesses.

By the 1990s, Chris Salomon, a direct descendant of the original family, had become alarmed. He owned a print shop in Fort Wayne but had grown up on the farm and often took his daughter, Lynne, to visit his parents who still lived there. Later, Chris, his wife, Maxine, and Lynne lived at the farm after his parents’ deaths. 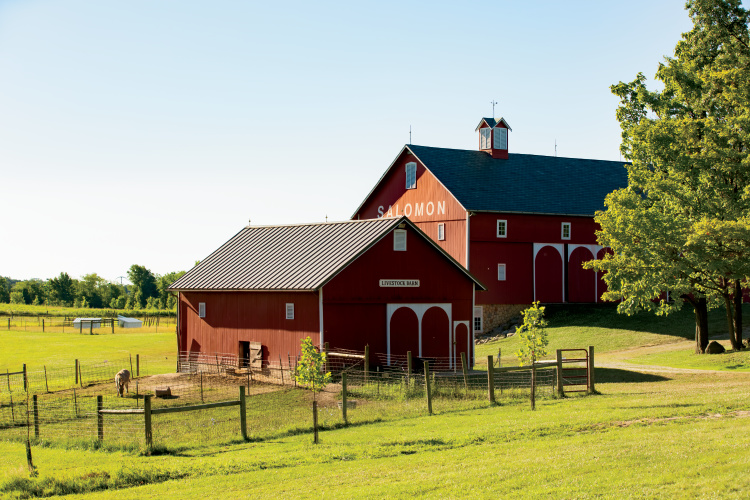 When Chris realized how quickly agricultural ground was being developed – and not wanting the same fate for his family farm – he offered to donate 170 acres to the Fort Wayne Parks Department. The department accepted the offer and gained ownership in 1996. It then became known as Salomon Farm Park.

One stipulation of the family’s agreement was that Salomon Farm Park be established with a specific historic theme.

“The Salomon family asked that it be maintained within the 1920s through 1940s time periods,” says Kellie Adkins, manager of Outdoor Recreation, Fort Wayne Parks and Recreation. “We chose the 1930s.”

While the park is not a living-history farm (the staff wear jeans and T-shirts), its structures reflect the time period.

“The homestead when renovated will give tourists an opportunity to see what life was like in that time frame,” says Adkins.

Improvements to the farm’s two-story red barn, built in 1874, have been made for safety rather than aesthetics. While the 145-year-old structure’s original hand-hewn beams remain, its siding and foundation have been replaced.

“We saved a section of old foundation so people can see the fieldstones that were used,” Adkins says. As the barn is not equipped with heat or air conditioning, it is only used from May through October. 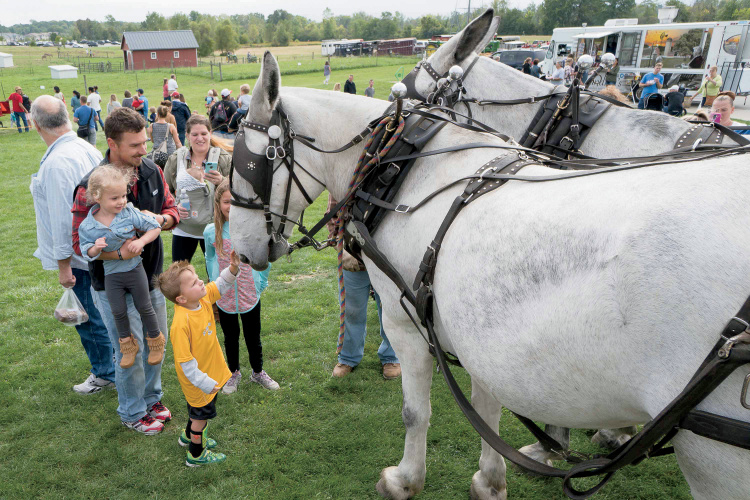 A Place for Learning

Since the family’s donation, Salomon Farm Park has evolved into a place where visitors can experience agricultural activities from both the past and modern times. The agritourism destination offers year-round events, classes, camps and more.

The Wolf Family Learning Center is one building on the property that’s used year round. Originally intended for summer day-campers, the program has expanded to offer culinary classes for all ages in the center’s expansive kitchen.

Though activities within the buildings are instructive, it is perhaps outside where the learning opportunities the Salomons hoped for really take place.

“We offer classes about farming because we want kids to recognize that agriculture is an important career field,” says Adkins. “Local farmers teach about equipment, crop production, caring for livestock and the challenges farmers face.” 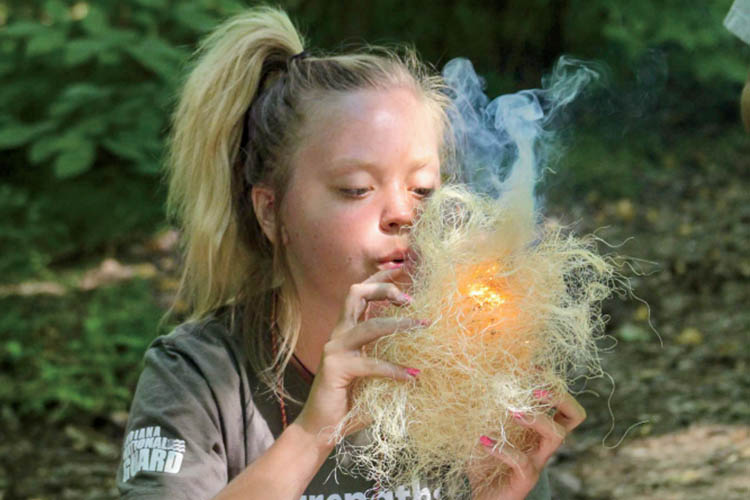 Livestock was an important part of farms in the early 20th century, and during warm weather, Salomon Farm Park accommodates with pigs, pygmy goats, donkeys, a miniature horse and sheep. There is also a turtle. To make it more comfortable for younger campers, most of the animals are kept small in size.

“We want kids to feel safe while feeding, giving fresh water, and grooming,” says Adkins. The animals are cared for by park staff in the summer, then are transported to a local farmer who houses them during the winter.
Salomon Farm Park is not just for the young.

“The Fiber Arts Festival was prompted by the interest of older citizens,” says Adkins. “We learned they liked learning about the dying arts of felting, spinning and knitting.” Held in May, the festival attracts approximately 1,000 people for demonstrations conducted by members of local guilds.

The farm’s two-day Fall Harvest Festival offers wagon rides, bonfires and meals set up in the barn, prompting as many as 5,000 people to attend. Both festivals are free to the public. 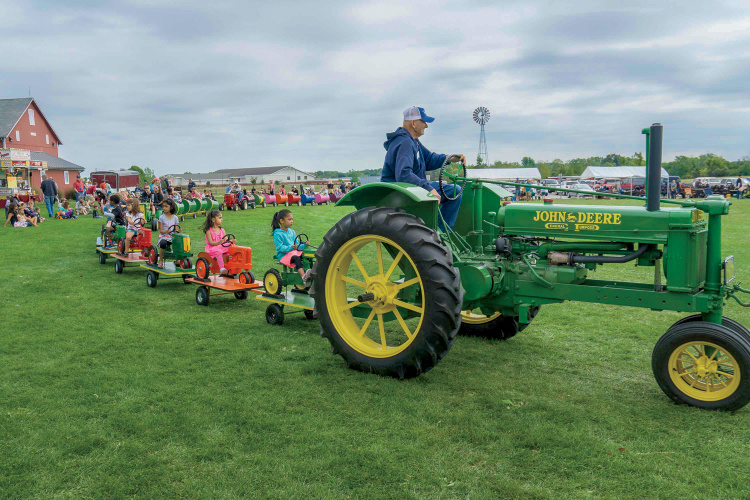 Adkins praises the dozens of volunteers who help keep the operation running.

“We could not exist without them,” she says. “In addition to the classes and festivals, farmers use their own equipment to plant, disk and harvest. Volunteers care for gardens around the buildings as well. We provide financial support for supplies, but they do the work.”

With the popularity of Salomon Farm Park’s multiple events, Adkins believes it has met a need in the community.

“The park is situated in an area with many grocery stores,” she says. “Yet we have a successful farmers market in the summer. People want to purchase items picked from the vine that morning. They want to eat healthy and support local producers. That supports both the goals of the Salomons and of us to encourage people to get to the soul of farming. If we don’t support our farmers, we don’t have food.” 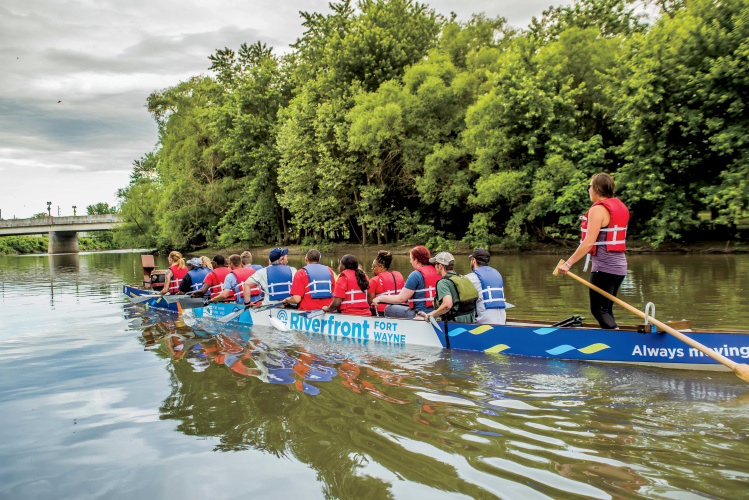